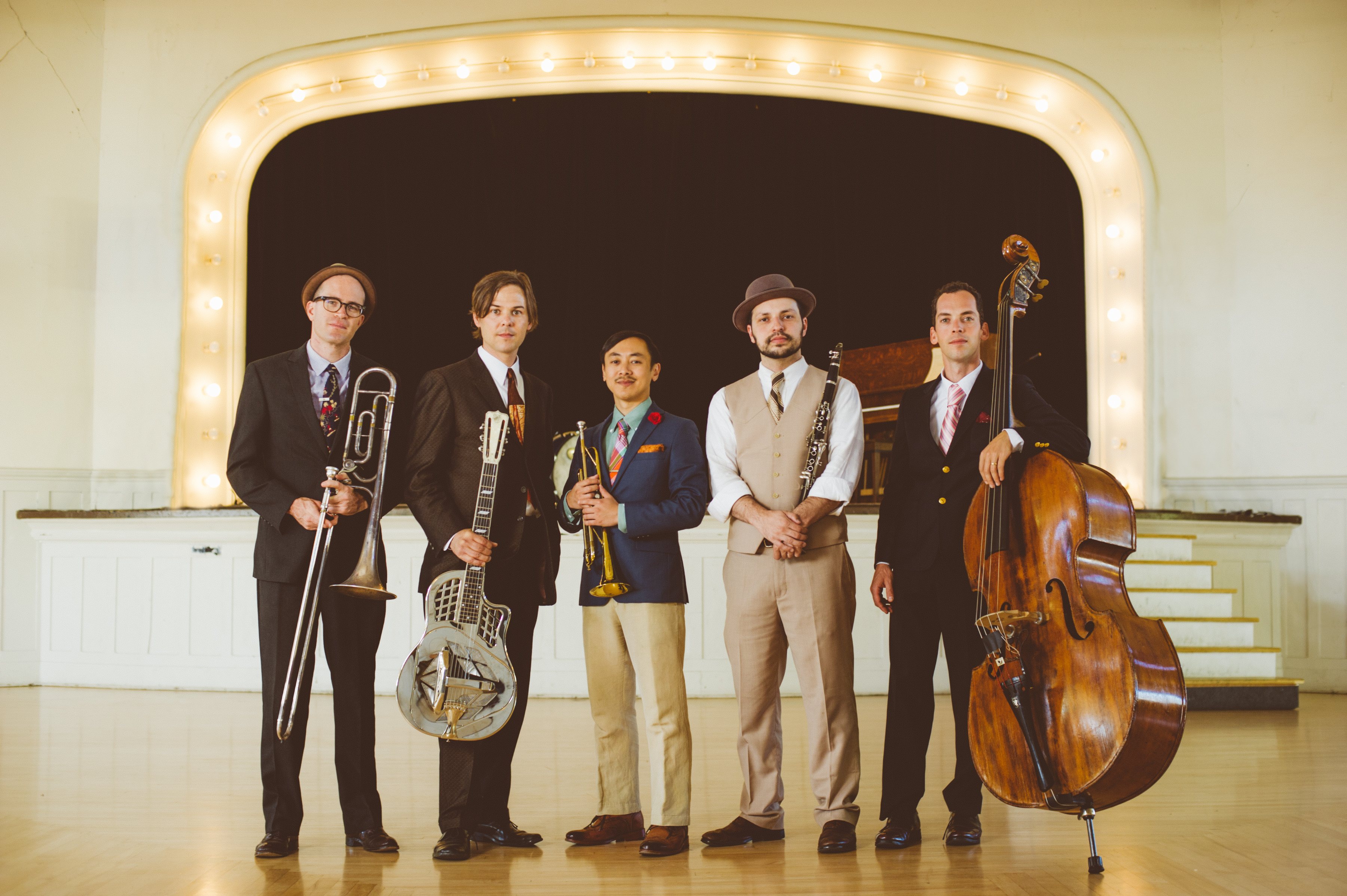 A chance meeting in 2012 between Seattle guitarist Greg Ruby and New York multi-instrumentalist Dennis Lichtman ignited the flame for the Rhythm Runners. Randomly striking up a conversation in a shoebox-sized music venue in Brooklyn, Litchman and Ruby soon realized they both shared a love of vintage jazz. Lichtman, after learning that Ruby was a guitar player from Seattle, asked, “By chance, are you Greg Ruby…I was just given your name for my upcoming West Coast tour. I was planning on calling you tomorrow!?!” With that coincidence as an auspicious sign, Litchman and Ruby joined forces and the Rhythm Runners began.  Joined by trumpeter Gordon Au from New York, trombonist Charlie Halloran and bassist Cassidy Holden, both from New Orleans and Pacific Northwest drummer Julian MacDonough, the Rhythm Runners deliver an intoxicating sound for your dancing and listening delight.

Leading his own groups, he can performs at swing dances, concert halls and festivals including the French Quarter Festival, Lindy on the Rocks, DjangoFest Northwest, and the Earshot jazz festival. During his years as a member of Pearl Django (2002-2007), Greg played the main-stage at the prestigious Django Reinhardt Festival in Samois-sur-seine, France. As founding member of Hot Club Sandwich, Greg can be heard on the band’s recordings and produced their 2010 release, And If Only, featuring legendary vocalist Dan Hicks. Greg’s compositions have been heard on radio, television and documentaries including NBC’s Parks and Recreation and Freakanomics. As a respected music instructor, he teaches at schools, camps and clinics and has published the Pearl Django Play-Along Book Vol.1, Frank D. Waldron: Seattle’s Syncopated Classic and will be releasing a play-along CD/book on the swing guitar mastery of Oscar Aleman in the Spring of 2018. His latest project “Syncopated Classic” unearths, records and celebrates the lost compositions from 1924 by the eminent Seattle jazz icon Frank D. Waldron. Greg holds a Bachelor of Music degree from Cornish College of the Arts, Seattle, WA.

Originally from Boston, MA and currently living in New York City, Dennis Lichtman is a multi-instrumentalist (clarinet, fiddle, and mandolin) who is deeply entrenched in early- to mid-1900’s American music, from traditional jazz and swing to bluegrass and western swing. Since 2007, Dennis has been the clarinetist and bandleader of the famed Tuesday night traditional-jazz jam session at Mona’s in downtown New York, which was profiled in the New York Times, and has been described by the Wall Street Journal as “ground zero for an emerging late-night scene of young swing and traditional jazz players.”

Lichtman released two new albums in 2017: Queens Jazz – A Living Tradition, and The Brain Cloud: Live at Barbès.”  Queens Jazz features nine original compositions inspired by the migration of jazz legends into the borough of Queens, NY in the 1920’s and 1930’s. Live at Barbès documents a Monday night residency in Brooklyn, which Lichtman’s western swing sextet, The Brain Cloud, has held down for five years.

Lichtman has performed at Carnegie Hall, major festivals throughout the United States, and on stages in Europe, Brazil, and China.  He is on the faculty of the Welbourne Traditional Jazz Music Camp in Middleburg, VA, and has led college master classes and public school workshops through the Midori Foundation, Lincoln Center’s Meet The Artist Series, and Beijing’s Ping-Pong Productions.    www.DennisLichtman.com

Called “comfortable in any idiom and fearless” by music writer Michael Steinman, Gordon Au draws upon a palette ranging from the traditional jazz of Louis Armstrong to the modern jazz of New York. Gordon leads the Grand St. Stompers, a traditional jazz band called “a pillar of New York’s hot jazz scene” by The New York Times, and appears with the Grammy-winning Vince Giordano & the Nighthawks, the Louis Armstrong Eternity Band at Birdland, Dandy Wellington, and many others. He is a frequent guest artist at music festivals around the country, including the Redwood Coast Music Festival and Monterey Jazz Bash By the Bay, as well as at swing dance events such as Lindy Focus and the Washington DC Lindy Exchange. Gordon has recorded with Brian Blade & Davy Mooney, George Garzone, Rich Perry, and Melissa Aldana; written for Tiger Okoshi, for the third-stream Blue Moon Ensemble, for Melissa Aldana’s award-winning album “Second Cycle,” and for Hollywood actress/singer Elizabeth Shapiro; and served as Musical Director and arranger for Spanish Jota star Carmen París’ genre-blending “Ejazz con Jota” album. Gordon has performed in Japan, Australia, England, France, Spain, Finland, the Netherlands, Panama, Israel, Mexico, and in India with Herbie Hancock and others as part of the US State Department’s “The Living Dream” tour. Gordon is a graduate of Berklee College of Music and the Thelonious Monk Institute of Jazz Performance, and teaches for Jazz at Lincoln Center’s WeBop program.  GordonAuMusic.com.

Chances are you can’t watch music in New Orleans for too long before coming across trombonist Charlie Halloran. A fixture of the Crescent City’s traditional jazz and Frenchmen Street scene, Charlie performs regularly with fan favorites Meschiya Lake and the Little Big Horns, the Shotgun Jazz Band, the Panorama Jazz Band, the Palmetto Bug Stompers and Tuba Skinny. Named a rising star in Downbeat Magazine and recognized as one of New Orleans’ top trombonists in Offbeat Magazine, Halloran also maintains a busy recording schedule, having lent his talents to Jon Cleary’s Grammy winning album “Go Go Juice”, as well as recordings released by U2, Rickie Lee Jones, John Boutte, Alex McMurray, Pokey LaFarge, Luke Winslow King, and countless traditional jazz bands. His own CD, “Charlie Halloran and the Quality 6”, was nominated for best traditional jazz CD by Offbeat magazine in 2016 and listed in the top 50 Louisiana recordings that same year. His followup recording, “Ce Biguine”, featuring music from the French Antilles was hailed by Caribbean Beat magazine for its “nostalgic ambience, while the music has a quality that makes you want to grab a partner and dance the night away under tropical stars”. Charlie joined the platinum selling Squirrel Nut Zippers in 2009 with whom he traveled all over the USA and South America, but you’re more likely to spot him at French Quarter Festival or Jazz Fest where he is a frequent face on the traditional jazz stages. Still Charlie has performed with Allen Toussaint, the O’Jays, and indie rockers Calexico and the Walkmen.  www.charliehalloran.com

Cassidy Holden is a bassist and rhythm section player performing traditional jazz and Delta blues. Cassidy can be heard across the U.S. and Europe as a sideman in the company of The Loose Marbles, Gordon Webster, Luke Winslow-King, Dan Levinson, and leading his own group, Cassidy and the New Orleans Kids. 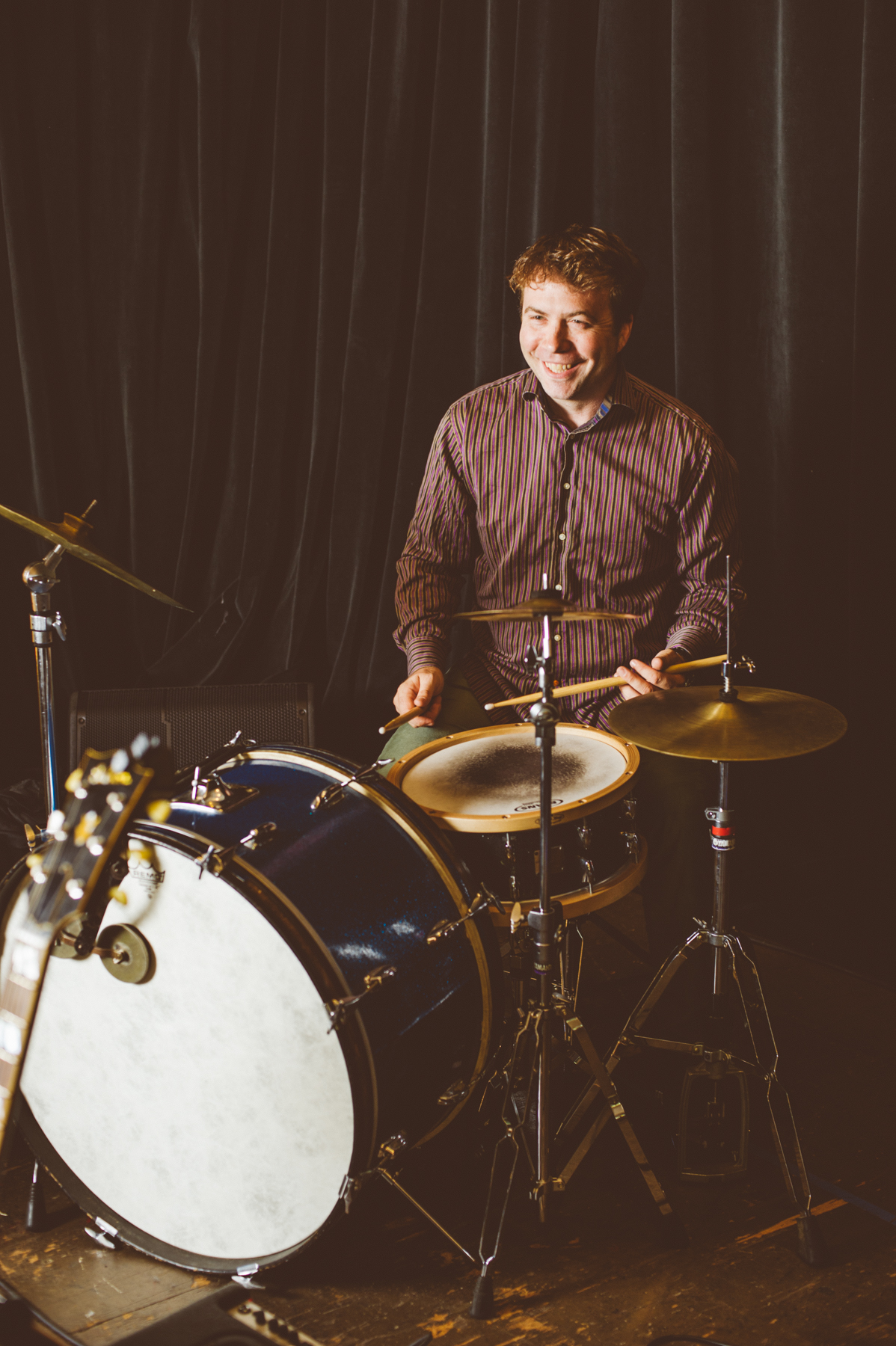 Julian MacDonough is one of the most in demand jazz drummers in the Pacific Northwest. He performs big band and small combo swing with Casey MacGill, traditional jazz with Greg Ruby and the Rhythm Runner and the Careless Lovers, modern jazz with Mike Allen and genre-bending “funk” with Megatron. In addition to being music faculty at Western Washington University, Julian produces Bellingham’s popular Whatcom jazz concert series.